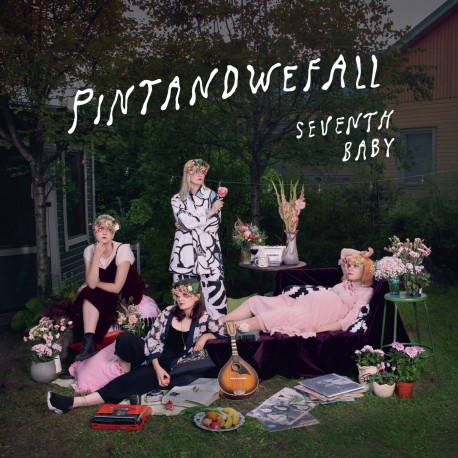 Pintandwefall reveal details of their new album, Seventh Baby, which

Pintandwefall tell us of Seventh Baby “We started sending each other

short, and a lot of the songs coincidentally dealt with different

aspects of everyday life with an absurd twist to them. We recorded the

album within a 6-day period during the hottest days of early July, and

it ended up becoming more guitar-driven than our previous albums, with

some soft shoegaze moods in the mix. We were and are especially hyped

about working with Liisa Tani, aka Sir Liselot, on this album, and her

energy and unique touch can be heard throughout the songs. Also, it was

about time to have an all female panel in the studio! We hope you will

love listening to Seventh Baby as much as we loved making it."

Produced, recorded and mixed by Liisa Tani, recorded at Pihastudio 2021

Pintandwefall consists of four musical geniuses all of whom are founding

members of Pintandwefall. Over their 15 years of existence the band have

released six albums, a few EPs, dozens of music videos, and a bunch of

artistic tentacles throughout the Finnish music field in bands such as

Ruusut, Risto, Kynnet and RULES, and also as solo performers in The

Hearing, Ninni Forever Band and KO:MI. In other words, this is an

exceptionally powerful reverse superband whose plan is to carry on

carrying out their spontaneous ideas forever.