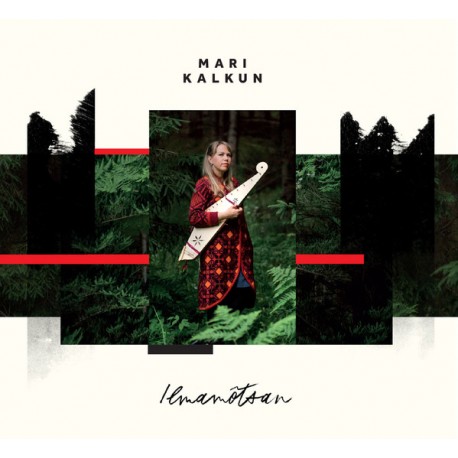 One of Europe’s smallest nations, Estonia is also among the most heavily forested. “The woods are a sacred place for many of us,” observes folksinger-songwriter Mari Kalkun. “Many Estonians have a spiritual connection to the trees, and a walk in the forest can be compared to a mini-pilgrimage.” Kalkun’s music is based on ancient regilaul chants, which she refreshes with newly composed works, and at the heart of Ilmamõtsan (In the Wood of the World), her third solo album, is the forest, setting or reference point for most of the album’s 12 tracks. It also reverberates in her spellbinding voice and exquisitely sparse arrangements—allowing songs to breathe as naturally as trees produce oxygen—using mainly kannel (an Estonian zither), accordion and harmonium. The artist honors not only trees but also cultural-linguistic roots, singing in Estonian and the languages of the country’s southeast corner—her native Võro and its sister tongue Seto. Her sylvan theme embraces family stories and the cause of indigenous peoples as well. Keelega-meelega (With Tongue and Heart) uses the sea as a metaphor for life’s journey, highlighting key guideposts—“forest, mother, land, father”. Deeper into the woods is Mõtsavele mäng (The Forest Brother Game), an impressionistic tale inspired by the resistance to Soviet occupation. Süda tuksub (The Heart Beats) is a poem of longing, while Laul kahele (A Song for Two) celebrates the wedding of friends. Kalkun plays deftly with contrasts: Joy and lament, mystery and clarity, forest as integral yet threatened. “Silence is becoming one of the rarest resources,” she said recently. “Music starts from silence… Silence, forests and trees should be human rights. We need them for peaceful life, we need them to continue the music.” If you don’t have a forest nearby, a sound alternative would be listening to Kalkun’s soothing, abundantly wooded songs. (Nordic Notes)