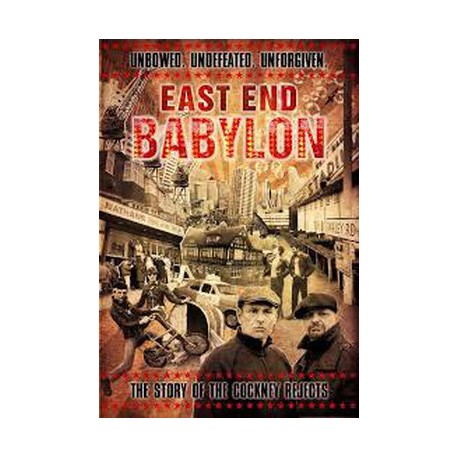 Rarely in the long history of British rock'n'roll has there been a story of such depth, magnitude and sheer turbulence as that of the Cockney Rejects.

There have been many "rockumentaries" over the years, but director Richard England looked between the lines and realised that there was something very different here - a story spanning over a hundred years, a story of the most impoverished place in Britain, it's people, culture and way of life that is now all but extinct, that in turn gave birth to one of the most ferocious rock'n'roll bands that ever lived.

From the heaving masses living around the largest docks in the world, to the bombs that flew through world war two, 'East End Babylon' takes us on a journey through smoky boxing clubs, battles on the terraces and piss stained boozers as three dead end kids formed a band that would be the last word in rock'n'roll savagery.

Mistrusted and misunderstood by the rock elite and media, the Rejects were one of a kind - the first band to combine rock'n'roll and football, and imbued with a "take no shit" attitude, which has often been copied but never equaled.

Follow the band and its road crew of West Ham's infamous ICF hooligans as they take their furious brand of rock'n'roll on the road, resulting in running battles with Nazis, rival football firms, legendary Top of the Pops performances, culminating in the vicious "battle of Birmingham" which finished the band as a touring unit.

Witness the redemption as the Rejects, now a worldwide cult who's music has influenced some of the biggest bands on the planet, play to hundreds of thousands of people all over the globe, uniting kids from all backgrounds with their particular brand of rock and football.

Come and feel the mighty heart that beats to the sound of rivet hammers on a background of claret and blue.

This is East End Babylon.