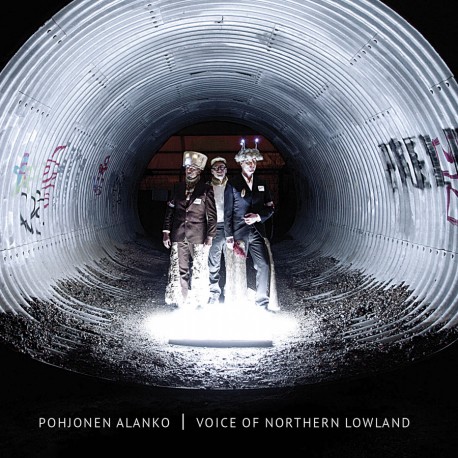 Pohjonen Alanko is a Finnish vocal improvisatory powerhouse operated by the vocal talent of Kimmo Pohjonen and Ismo Alanko, with electronics by the multidisciplinary sound designer Tuomas Norvio (Rinneradio). Pohjonen is known of his avant-gardist accordion solo albums and the band KTU with Trey Gunn and Pat Mastelotto, whereas Ismo Alanko’s (Sielun Veljet, Hassisen Kone) 40-year career has made him a leading force in the Finnish rock scene.

The core of Pohjonen Alanko’s music is built on vocal improvisation and electronic sound processing. Sounds, melodies, and rhythms abound in a free state of mind and emotion, resulting in compositions that stimulate the imagination with strong visual notions. Various sounds emitting from the human body, hypnotic mantras and lyrical melodies meet modern technology and burst out in a frenzy of pagan rituals, beautiful hymns, or barbarous dance music.

In addition to human voices and Norvio’s electronics the group’s musical scenery is at times colored by clashes with experimental accordion playing and punk-styled guitars. The group’s musical concept is in perpetual motion, ready to add new forms and hues to it.

Both Pohjonen and Alanko have long careers behind them, but in this project both approach music from a different angle compared to their previous material.

“This is about vocal improvisation and examining the capabilities of the human voice. When we began, we just started making noise with our voices, instruments were added in later. We wanted to take this as far from our comfort zone and the music we’ve made so far as possible. We asked Norvio to join, because we wanted to add an extra layer of sound processing and have electronic rhythms paired with our voices”, Pohjonen and Alanko describe.

Svart Records will release the band’s debut full length album Voice of Northern Lowland on CD and digital formats on October 28th 2022. To celebrate the album release the band will tour Finland starting from Helsinki on November 9th.