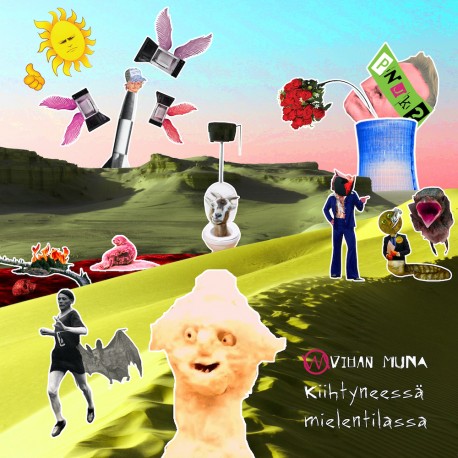 
The firstborn LP of Vihan muna is, as the name implies, a description of our time. Entropy is increasing, time is accelerating from zero to one hundred in an instant, people are accelerating with their sheer stagnation, and even silence is accelerating into Babylon, where the word no longer has a place in the midst of all the cry.
The old soul that has risen from the crypt, the human rag itself, is running but can't keep up because the train is pounding! Paavo also runs towards the rocking Lilja shedding tears: as close, as far away, as the Cubist Stone.

Before hardcore, there weren't many punk bands in Turku (a city on the southwest coast of Finland), at least not many that recorded. One of the few and, without a doubt, the best was TV:n Orjat (TV's Slaves).

They were formed in Autumn 1977 by singer Kari Sutela and guitarist Juha Laukkanen. They were joined by Juha Kettinen (bass), Matti Englund (drums) and Jarmo Hirvi (guitar). They gigged mostly in the Turku area, but in 1979 they were invited to play at the Hilse concert in Tamper. The Hilse concert was on 25th June 1979 and the next day they recorded the catchy 'Sä Et Pysty Irtautuu' ("You Can't Break Away") in Microvox-studio, Lahti, for the legendary Hilselp album. Originally they meant to record a song called 'Jyrki Hämäläinen on rikollinen' ("Jyrki Hämäläinen is a criminal"). Hämäläinen was the chief editor of the Finnish teen magazine Suosikki. I guess they didn't have guts to do it, but anyway 'Sä Et Pysty Irtautuu' is a very good melodic punk song, one of the best on the album that also includes Ratsia, Pelle Miljoona, Eppu Normaali, Kohu-63 and many more, so...

In July Hirvi went on a holiday to Northern Finland and when he came back he found out he'd been fired. He formed his own band Wrum, which had a minor hit with 'Takapihojen Rocktähdet' in 1980. He also recorded a single with Jabi & Taivaanrannan Taiteilijat and when Wrum made comeback in the 2000s, they made two CDs. Bass player Kettinen was also fired, because of his decision to perform his compulsory military service. He was replaced by ex-Vihan Muna bassist Harri "Hoss" Siivonen. And even that wasn't enough, soon Englund was replaced by Pekka Eskelinen.

The band got a record deal with the not-so-cool Kerberos label and recorded their only single Tavallinen Ihminen (Ordinary People) b/w 'Terve Hulluus' (Healthy Insanity) in 1980. 'Tavallinen Ihminen' was also played on the TV show Levyraati in which the bassist was future Sielun Veljet bassist Jouko Hook, who didn't play on the record. The single is excellent: catchy new wave/punk and it's a shame they didn't record more. (There are some demos around and three songs can be found on a CDR-compilation. Songs are from 1980 and of course quite good.)

The band broke up in 1981, but made a comeback gig in 1985 with Vihan Muna. After TV:n Orjat Sutela sang for a while in the post-punk band Musta, Laukkanen played in AD and 500 kg Lihaa, Siivonen is known from the bands Hoss & the Radicals, Liikkuvat Lapset, Nylon 66'ers and Vihan Muna which made comeback again. 'Terve Hulluus', ;Tavallinen Ihminen;, 'Sä Et Pysty Irtautuu' and the unreleased 'Synnissä' were all covered by Finnish punk band Raivopäät.