> Music>Vinyls>Pennies By The Pound: Heat Death Of The Universe (LP) 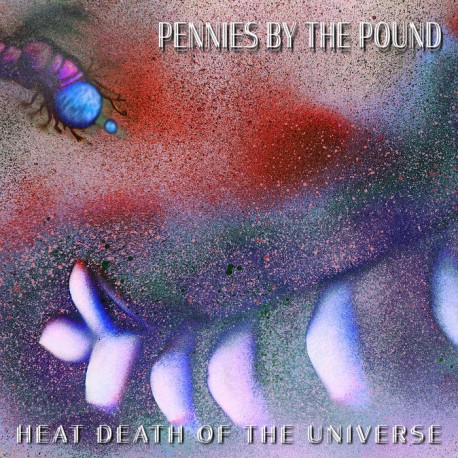 Pennies By The Pound: Heat Death Of The Universe (LP)

Pennies By The Pound: Heat Death Of The Universe
LP
LILP-039, Lilith Records, 2021

Pennies By The Pound: Heat Death Of The Universe
LP
LILP-039, Lilith Records, 2021

Given that lockdown has meant that nobody is really touring at the moment and, since so many bands depend on this for their main income, we see even the top-dogs in the rock industry turning their attention to other efforts, some of which are interesting and some of which are not so much. One of the more interesting characters during this period has turned out to be Mark Gardener, frontman and co-founder of legendary shoegaze band Ride. Not only has he been releasing music under his own name, but he has been mixing, mastering and producing other artists’ music through his Oxford-based studio, which is unsurprisingly called OX4 Sound Studio Between all of these affairs, Gardener has proven to be one of the most prolific personalities on the music scene over the past year.

Today we turn our attention to one of the artists he has been working with, who hail from the land of ice and snow a.k.a. Finland. But their sound is not what you would expect for a band from Finland, which is often known for its goth, hard rock, alternative, and metal underpinnings. And boy do these prog-psych rockers – Pennies By The Pound – deliver strongly on their album‘Heat Death of the Universe’. Released via Lilith Records, this long-player was produced, recorded and mixed by Rauli ‘Rake’ Eskolin, a rather achieved Finnish producer who has worked on over a dozen No. 1 records in Finland in the past 20 years.

“Lyrically, there is a loose theme on the album about the way people continue to actually socially distance themselves from others (even without or before the pandemic) due to the influence of social media and maybe the internet in general. The album title is a nod to that, the “heat death of the universe” being the lack of and eventual end of real-life social connections between people,” says Johannes Susitaival.

Hailing from Helsinki, Pennies by the Pound was formed in 2016 by Johannes Susitaival as a solo project, but it quickly became a three-piece involving musicians from his past bands. Ahead of this, the band previewed lead track‘Indigo Screams‘, along with accompanying lyrics video.

While still part of a punk rock band, Johannes began exploring some quite different musical avenues, which led to the self-produced ‘Bloodshed and the Blinding Sunlight’ EP in 2018. Having found their ideal producer after several years of searching, they began recording demos in 2019 for what would become this album. Due to the pandemic, they were finally able to record these tracks in autumn of 2020.

“This album is rooted in the fact that I became heavily interested in ’80s Marillion a few years ago, especially the ‘Clutching at Straws’ LP. You can definitely hear the influence on the record, but there’s a lot of ’80s Rush too, spiced up with contemporary influences like Muse and Radiohead. As an artist, I’ve always been hesitant to make records that sound the same as the previous ones I’ve done, so the sound keeps evolving,” says Johannes Susitaival.

“I wanted to make a record that is borderline ridiculous, in some ways, and definitely not very contemporary. Then again, for the first time in my life, I had a chance to work with a producer, whose work I have admired since the turn of the millennium and this definitely influenced the album and its sound”.