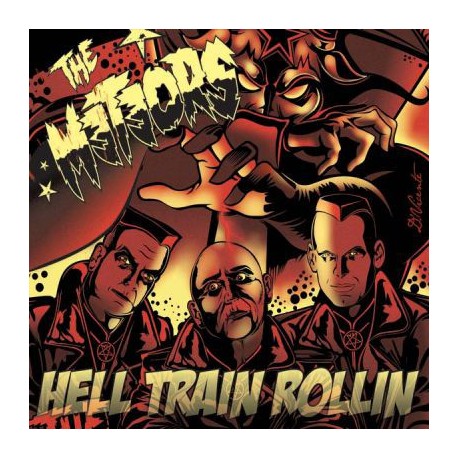 
A1 Never Stop The Hate Train

A2 Down And Dirty

A3 Another Day On Fire

A7 (They Call Me) Creepy

B8 If Thats The Way You Want It

B9 The Old Man Down The Road

B10 Slice By Slice

B12 Surfin Home On A Dead Girl

B14 You ain't gonna bring me down

Reissue of classic Psychobilly standard-bearers The Meteors “Hell Train Rollin” from 2012. Over more than 3 decades, ‘The Meteors’ have been fiercely carrying the banner of pure Psychobilly. “Hell Train Rollin” is a hate fueled juggernaut of mean spirited real Rock ‘n Roll that steamrolls out of the gate and smashes everyone and everything straight in the face. Songs like “Another Day On Fire” are pure classics, as catchy and thrilling as a ring-side seat to a Hell’s Angels knife fight or like Johnny Cash on PCP. With a sneer and a chip on their shoulders the size of Texas, “Hell Train Rollin” is shot after shot of bangers, double bass thumpers, frenetic guitars and relentless drums that makes it unmissable Meteors at their best.