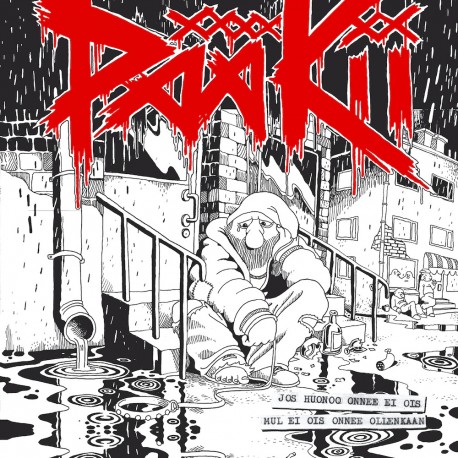 Pää Kii (‘Shut Up’ approximately abbreviated, though literally ‘Close The Head’) is a Finnish punk rock band formed in 2012. In practice it is just a name for another one of the many groups of the figurehead and the main songwriter Teemu Bergman, whose credits stretch back to the late 1990’s. Before Pää Kii, Mr Bergman was already well known and appreciated in international punk circles with his long-time band, Kakka-hätä 77 ('Poop Urge -77' for what it's worth), having a.o. toured the US and selling a healthy amount of records hand-to-hand and by mail order, especially to Japan. Finland’s most prolific songwriter ever, now controversial for his far-right views, Kari Peitsamo even wrote an English song about the band, ‘Urgent Need to Poo-poo in 1977’. The namesake of possibly the most famous Finnish ice hockey player ever, a certain Selänne, Teemu (pronounced more like ‘there-moo’ not ‘tee’) has also played in such bands as 20 Dollar Whore, Nazi Death Camp, Grandma Kickers, Kytänsoittajat, Runkku-Radio, Vaasankatu SS and Liimanarina, some of whom have enjoyed underground following around the world for decades in their own right. The other guys in the band, Vekku, Antti and Heikki, have a considerable history and presence in a number of more or less punky kind of groups nonetheless.

Teemu’s songwriting has always been lyrically a combination of outrageous humour and sharp social commentary and musically catchy and relatively easy-going, which is why Pää Kii’s first self-titled album (Airiston Punk-Levyt on vinyl, Stupido Records on CD, 2012) was considered an instant classic not just in Finland but the world over. In their native land it reached no. 6 in the album charts, an unprecedented position for a band from outside the mainstream and for indie labels in that country. To this day it is selling constantly even among people not usually interested in punk rock. The same thing with their shows, the audience consists of an unusual mix of people of all ages and walks of life. Then again, when Pää Kii did a US East Coast tour in 2015, they sometimes ended up playing to just about ten people in somebody’s basement. Curiously enough, a Brooklyn gig was cancelled after a promotor of sorts had Google-translated some of their lyrics and found them too un-PC for his Straight Edge mind, obviously missing the occasional irony and ignoring the likely web-mistranslation.

After the first album, Pää Kii released several exclusive vinyl-only singles, a handful of split EP’s with lesser known Finnish bands and some compilation tracks on various labels over the years. In October 2018 their second full-length album ‘Jos Huonoo Onnee Ei Ois Mul Ei Ois Onnee Ollenkaan’ (‘If It Wasn't for Bad Luck, I Wouldn't Have No Luck at All’) was released exclusively on Stupido and it reached no. 2 in the Finnish national album charts. With a nod to an old blues tune in its title, its songs were also reaching outside of the often strict limits of three chord punk, though not exactly heading towards avant-garde or jazz. Those in the know, who are aware of Teemu’s vast knowledge of different music styles and owning a personal record collection of tens of thousands of vinyls (absolutely no CD’s there!), are wondering when are we gonna hear, say, an acoustic country, folk or blues album from this multi-talented dude? For you techno and synth-pop lovers out there, I dare say an electronic record from Teemu Bergman or this band is out of the question. Then again, what the f*** do I know – maybe that’s exactly what might be coming next.