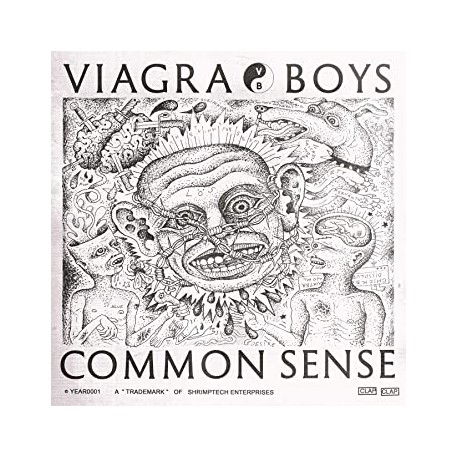 A2 Lick The Bag

When you name your band something like Viagra Boys, you are automatically offering people a love-it-or-hate-it prospect. But for those who bought in, the band delivered an impressive 2018 debut called Street Worms, a collection of skronking and chaotic post-punk. If you happened to catch them live, you already know the band could take those songs and make them feel like a party and an apocalypse at the same time. And today, it turns out we’re getting the next gnarled document of Viagra Boys’ worldview.

This morning, Viagra Boys surprise released a new EP called Common Sense. It features four new tracks, and comes with lyric videos for each. A press release describes the song “Common Sense” as “a glimpse of things to come from the band later this year,” so maybe the EP is just the beginning of a new Viagra Boys chapter.

But for now, the four new songs capture different sides of Viagra Boys’ personality. “Common Sense” picks up where “Just Like You” left off, a more anxious and atmospheric direction, with frontman Sebastian Murphy singing “Why can’t I have a little common sense/ Why don’t I realize that I might end up dead?” The whole song grapples with self-destructive patterns, but elsewhere the band delves back into — or perhaps wrangles with — their nihilistic aesthetic. In “Sentinel Island,” Murphy has lots of heroin and Fentanyl on him; on “Lick The Bag,” he proclaims “There’s some more fun to be had/ If you lick the bag.” On first listen though, it’s the title track that really stands out, hinting at an ever-so-slightly changed Viagra Boys.