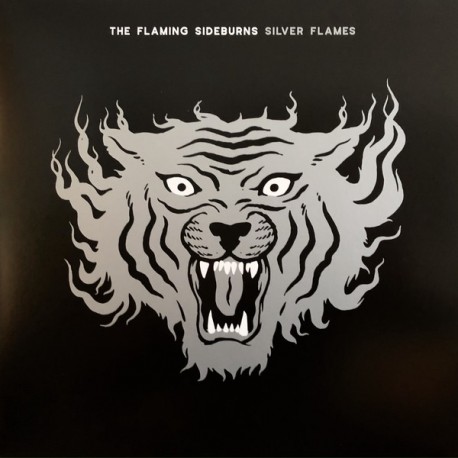 It might’ve taken 20 years but here it is: the original line-up of the Flaming Sideburns unleashes a brand new album “Silver Flames”. It can be seen as a follow-up to their now legendary debut “Hallelujah Rock’n’Rollah”, which was released two decades prior in 2001.

“Silver Flames” is an album nobody expected to happen. Most certainly it’s out of time and out of place in 2021 but that has never stopped the Flaming Sideburns on their mission. Instead they launch a rock’n’roll assault at full throttle.

It’s all there from straight-ahead rockers (“Silver Flame”, “Searching Like a Hyena”) to deep psychedelia (“Nibiru”, “Reverberation”) and from classic rock (“A Song for Robert”) to pop-tinged choruses (“Perfect Storm”, “Cast out my Demons”). The album is wrapped-up by “Trance-Noché” and its unusual combination of Latin American madness and Arctic hysteria — topped with the lyrics en Español.

”Silver Flames” might be versatile but all of the tracks have a common goal: to make it on the album they had to be good enough to stand on their own as a single release. “Hallelujah Rock’n’rollah” gave us seven singles and “Silver Flames” is well on its way to top that. “Soulshaking”, “Trance-Noché”, “Neverending” and “A Song for Robert” are already out on 7” vinyl and there’s more to come later this year.