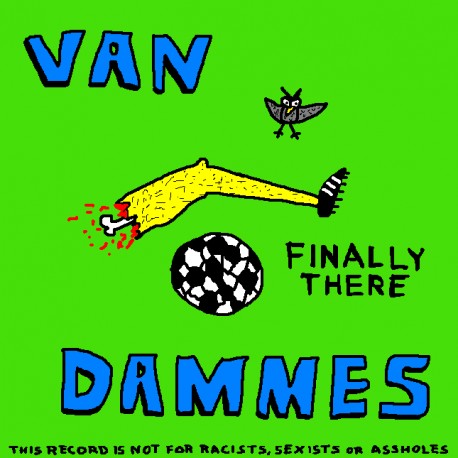 Football, and for our North American friends we’re talking about soccer here, songs usually suck, over the years the British charts, and I’m presuming it’s the same in most European countries, have been awash with truly terrible songs celebrating the beautiful game. Thankfully Finland’s Van Dammes have shown us the way, it doesn’t have to be terrible pop songs celebrating sport as their new EP, Finally There, celebrates Finland qualifying for Euro2020, the country’s first ever European Championship.

As you’d expect there’s a celebratory tone to the Finally There EP, the title track sums it up, it doesn’t matter whether they win or lose, the Van Dammes are just happy for their national team to finally be there. The upbeat celebratory feel carries on into It’s Time For Rivelution, which isn’t a spelling mistake as the song is dedicated to their team coach Markku ‘Rive’ Kanervaand, and the defiant closer Test The Best. Thankfully there’s none of the usual cheese that accompanies football themed releases, this is just the Van Dammes providing a thrashy trashy garage punk soundtrack for what will be one hell of a party in Finland this Summer.

Based on this soundtrack, and my love for the underdog, I’ll be cheering Finland on in the European Championships, unless of course they meet Wales, in which case my personal loyalties will take precedence, and I’ll be spinning Together Stronger (C’Mon Wales) by the Manic Street Preachers. Whilst the Finally There EP is celebrating the success of a national football team, it’s one that can, and should, be enjoyed whether or not you give the slightest fuck about football.

It’s been a long wait for Finland and the Van Dammes as Euro2020, like pretty much everything else, had been delayed by the pandemic and is now taking place this Summer, which means that the party can finally start. If the Euro2020 tournament was decided by the competing countries football anthems, then based on the Finally There EP Finland and the Van Dammes would have already been declared the winners.