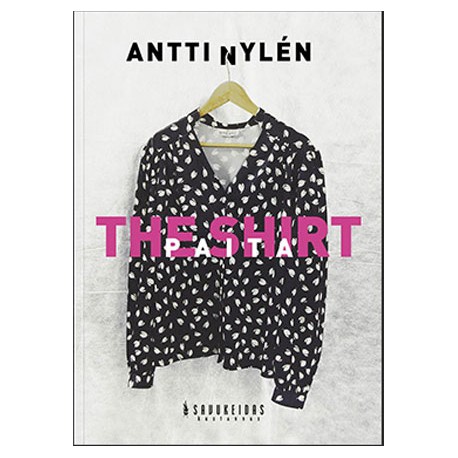 Author's note
From the photobook Paita – The Shirt

It is a material token of his body. Time and again he takes it off, as if peeling his skin, and throws it off into his audience, as if feeding lions.

The world is full of Morrissey’s shirts, but they are usually in shreds – which is natural, as they have been thrown to ravenous beasts.

Shirts in good condition are rare. This book is based on one.

In the evening of the 3rd of June 1984, The Smiths had just left the stage at the Provinssirock Festival in Seinäjoki, Finland.

Backstage, Marko Helistö approached the singer and asked if he could have his shirt. He promised to give Morrissey his own in return. Declining this offer, Morrissey smiled, and handed Helistö the garment he was currently wearing. It was a black polyester blouse of the ‘Butte Knit’ brand, adorned with white tulip or leaf patterns and cute puffed sleeves.

It was one of the two shirts Morrissey had for the gig. The first one – which was identical, but with inverted colours – had been thrown to the audience during the gig. Its whereabouts are not known.

During the band’s entire career The Smiths did not tour continental Europe very actively. Seinäjoki was the northernmost place the band ever visited.

The 1984 appearance at Provinssirock was also one of the few Smiths gigs Morrissey describes in detail in his Autobiography (2013): “I recall standing at the lip of the stage as if dragged from a river, the microphone slipping out of my wet hand, and no one around to caution how rain and electricity are deadly components to the overheated flesh.”

To have witnessed one of the greatest groups of all time perform live in Finland at the time when they had just released their debut album is an altogether ennobling quality.

In this book, the names of such persons are printed in italics.

In December 2013, Helistö made another approach, this time contacting me, asking if I would be interested in using, somehow, Morrissey’s shirt from 30 years ago. Helistö knew me by appearance, and knew that I was a fanatical Mozophile, but also that I had just begun translating Morrissey’s recently published Autobiography into Finnish.

Helistö had himself sported the shirt whenever attending Morrissey shows. And he was certainly not giving it away.

It is, after all, ‘Morrissey’s shirt.’ It just happens to be in Helistö’s possession.

I pondered a few weeks. Then I had an idea. It was to materialise, first, as a two-week community art project in the summer of 2014 – and now, as the book you have in your hands.

I asked several people to wear the shirt. Then I photographed them. Many people also found me and the shirt despite of me, having heard of the project from elsewhere. A genuine desire to participate was the only thing I required of them. I shot all 87 people during the last two weeks of August in a cramped pop-up studio in Helsinki. I tried not to direct my models in any way, because I wanted the whole situation to show in the final pictures, in all its weirdness and emotional confusion. Some models had with them some props of their own, such as pieces of Morrissey’s shirts taken as keepsakes from other gigs.

Those two weeks left behind a strange, strong feeling of togetherness and at least 20 feet of exposed black and white bulk film.

I developed the films, and as autumn nights grew darker, I retreated with my negatives into the darkroom.

There, alone, I wondered and pondered on what all those people actually have in common. At least they are all very beautiful.

Saturday, November 15th, Morrissey was performing at the Finlandia Hall in Helsinki. It was the first of two nights, and Helistö was in attendance, in the front, wearing The Shirt, of course.

A couple of weeks earlier I had contacted Morrissey’s tour manager with a short message about myself and my current project.

Morrissey had apparently read my message and checked my link to the crowdfunding site for the book. Anyway, he spotted the shirt during the first half of the set and asked Helistö if it was his. Helistö assured him of the fact.

“Does it smell?” Morrissey then asked.

It didn’t, anymore. Helistö had felt necessary to wash it after my photo shoot sessions.

A little later, during “Kiss Me A Lot,” Helistö invaded the stage and hugged Morrissey.

Thus, the contact with Morrissey’s flesh, which had been broken for a few months, was ritually restored.

Already at the initial stage of my idea I had jubilantly, defiantly liberated myself from all obligations to intellectualise or verbalise the project. Words do often tire and annoy me, just as nails can be boring to the carpenter.

Images, by contrast, hold for me the promise of fresh air.

But still, now that I have refreshed myself with these people and these pictures, and my first book of photos is finished, my obligations feel more like temptations.

For this reason, it is all the more pleasant to refuse them.