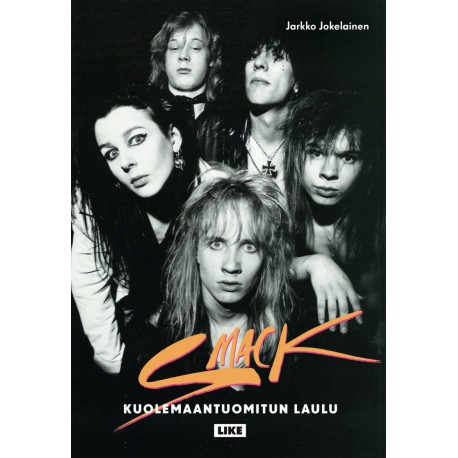 Smack formed in Helsinki, Finland in the summer of 1982, when Kartsa invited Manchuria, who he'd known from the late '70s Helsinki punk scene, to come jam with his new band. Manchuria, a seasoned guitarist at age 20, was skeptical. Although Kartsa was 19, Claude and Cheri were both just 16 at the time, and this was the first band for all three. Upon meeting Manchuria, Claude asked if he knew the New York Dolls song "Vietnamese Babies." Of course, he did, and as they played it, Manchuria was totally blown away by Claude's voice, more the voice of a whiskey soaked old-soul, than that of a skinny kid. Manchuria joined the band. Inspired by the likes of Iggy & the Stooges, Velvet Underground, The Doors, MC5, and Sex Pistols, Claude and Manchuria began writing songs together at their lockout in the legendary Lepakko in Helsinki.

Many drummers came and went until they finally settled on Juki Marjala, despite the fact that he was much older than the rest of them. In late 1983, they did a gig as the Lucky Monkeys. Lido Salonen saw this gig and signed them to his Cityboy label, which had distribution with Polarvox. Lido was also running a booking agency, so he became their record label, agent and personal manager all in one.

In January 1984, the band, now calling themselves Smack, a name they claim to have taken from comic books, opened some shows for Hanoi Rocks. They released their first single, "Criminal," that April. Two months later, 18-year-old Kinde replaced Juki Marjala on drums and the band went back into the studio to record their first album. T.T. Oksala, a prolific producer and sometime guitarist, was chosen to produce. He would continue to produce all but the band's final album.

The debut album, Smack On You, was released in September 1984. It got rave reviews and earned the band a big following right away. Some of the new private radio stations, multiplying across the country at the time, began playing the band's music. The sound of Smack On You is perhaps truest to the band. Classic tracks "Criminal" and "Run Rabbit Run"came close to capturing the brutal energy and fire of their live shows.

A few Months later, Rane replaced Kartsa and played guitar on the second LP, Rattlesnake Bite, released in the fall of 1985. A slightly more relaxed sounding album, Rattlesnake Bite, containing another of the band's gems, "Pass That Bottle," was also well received. "Stepping Stone" got lots of airplay and gained the band new fans. The album outsold Smack On You in Finland. In the USA, however, Smack On You, would always remain the band's best seller.

Jimi Zero replaced Cheri and played bass on the third LP, Live Desire, released in 1986. Although the recording equipment they used was ancient, the label only lent it the band for a couple of shows, which were not considered to be among Smack's best performances. While not definitive, the album is a good enough snapshot of what the band was like live at the time, and it covers most of their best material. The gorgeous gatefold sleeve, featuring Claude on the cover and a collage of live shots within, is easily the band's best album packaging.

Salvation, released in 1987, was the band's major label debut for CBS Records. For the first time, the band recorded in London instead of Finland. T.T. was unfamiliar with the studio and the album suffered somewhat production-wise as a result. Regardless, the material, notably, "Moonshine Chile," was still strong. The album shot to #2 on Finnish charts and marked the band's biggest commercial success. Following this newfound success, the double LP collection, State of Independence, was released in 1988, featuring both of the band's three song EPs Walkin' on the Wire ('85) and Paint It Black ('86), as well as tracks from the first three albums.

Looking for fresh ideas, Pave Maijanen was tapped by the band to produce their next album, Radical, also released in 1988. The band was a bit more mature at this point and Pave, being a bass player and singer himself, took a more hands-off approach to producing the record. Rane had become more involved in writing by this point in the band's evolution as well. For the first time, Manchuria and Claude shared songwriting credit with Rane on every track, including the memorable, "Russian Fields." The band played a few shows in support of Radical, but the dissipation of the old energy was becoming more evident. Making matters worse, some band members were by now having problems, both of their own and with each other. They soon found themselves inactive for the first time in their career.

By the spring 1989, the band almost dead, Claude and Manchuria decided to pack everything up and move to Los Angeles. Rane was in, but Kinde and Jimi did not want to make the move. Claude asked his friend Repa to come and play drums. They moved to L.A. in June of 1989, without a bass player. Smack went through several bass players in L.A. before finding Ulan Bator, a.k.a. Sam Yaffa, who was in Jetboy at the time and had been asked not to use his real name. This final line-up of Smack cut some demos for an intended EP that December. The EP was never released, but in 1992, Salvation and Radical were re-released on one CD with the bonus tracks "Can You Dig It" and "Crazy River" from those sessions.

Smack played a lot of clubs in L.A., but the move was just a temporary fix for the ailing band, who now spent most of their time partying. In July 1990, Claude informed his bandmates that he was heading back to Finland. Claude went on to form The Fishfaces and released the CD Love Songs for Hyenas in 1993. On September 22, 1996, Claude died of heart failure. Leaving the Planet, a second Fishfaces album, was released in 1998. Claude had finished recording vocals on two tracks and guest vocalists helped finish the album using Claude's lyrics.

Between 1984 and 1990, Smack performed some 400 live shows. Outside of Finland, however, Smack was always somewhat of a cult band. Still, many notable bands from the '80s to today, claim Smack as an influence. Izzy and Slash from Guns 'n' Roses mentioned Smack in interviews and attended their gigs in L.A. Kurt Cobain also talked Smack and Nirvana even covered "Run Rabbit Run." As with all great bands, new fans continue to find Smack to this day. Smack On You and Rattlesnake Bite were both re-released on CD with bonus tracks in 1997, while the rest of the band's recorded legacy remain sought after collector's items.

28 other products in the same category: